The Monarch Butterflies arrive here in large numbers and gather to mate
before heading on their migration north. 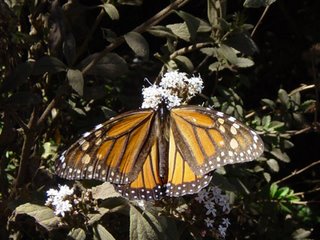 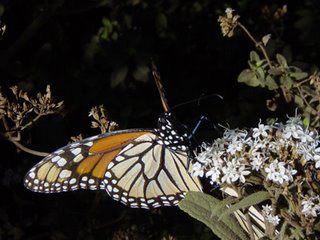 The Butterflies gather in great clumps in the trees at night to protect
themselves from the cold. The weight at times can break the limbs of trees off! 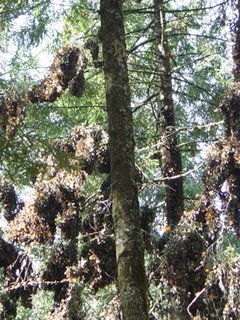 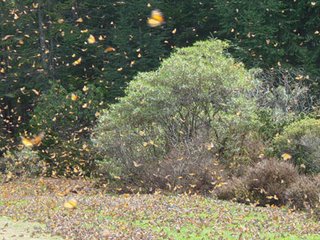 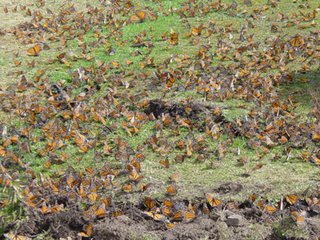 I found my way out to the Pacific coast past some sites that seem to
just cater for the tour buses. (Just happy I am not on one!) I arrived
in Pt Escondido, planning a stop of a day or two, undecided where to
camp here. Checking my guide books, I take a walk down the beach
only to find a German couple I met in Palenque and San Cristobal
I too found a place to camp. 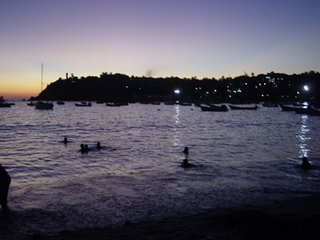 Being on the beach and where the fisherman come in with their boats was good,
and to get the fish from the boat in the morning was a real treat, 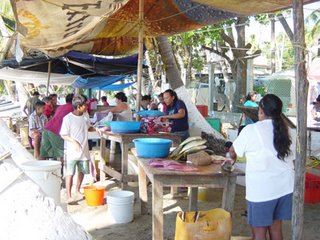 but the nice part is the women would clean or fillet fish for you. Part of the deal.
I stayed almost a week. In some parts in Mexico they do not look after their beaches. Here,
the community has taken an active role to keep their beach clean. Even the fishermen
do their part. Fish remains, etc are collected and reused. The waste water is disposed of well, and
the vendors on the beach keep the bottles and cups off the beach as well.
What a nice change.

This is the first of the Colonial towns I will cross but more important,
it is in the heart of Chiapas, a pleasant town high in the hills. This makes
a nice change from the flat land of theYucatan. 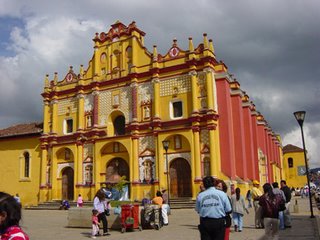 I was expecting to see some more Police and Military check points here
but it was a surprise not to be stopped or see many. 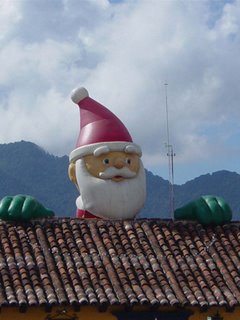 as I arrived just before Xmas, I think that Santa was attacking, but then
this is a strong Mayan area so Pagan beliefs run strong.
(It could be the army in camouflage) 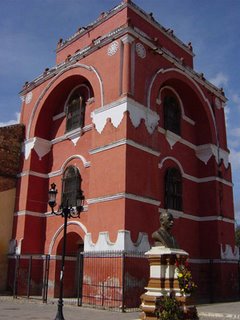 One of the last big Mayan sites , I was told that it was the garden of Eden.
the site is smaller than I expected but one that is different from others ,well
all are different to each other and this show how diverse the culture was 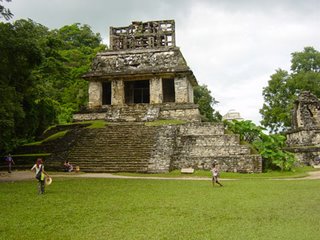 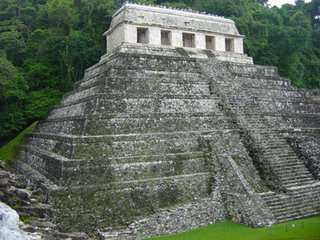 like all the sites here in Mexico you can not climb the Temples or access them
via other ways ,(this is to protect them ) 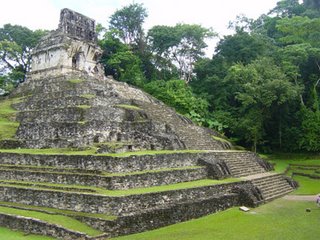 Once again a great Mayan site here in Mexico , but
I think this one is better than other here in Mexico and
quite and yes it too has the 52 year building plan 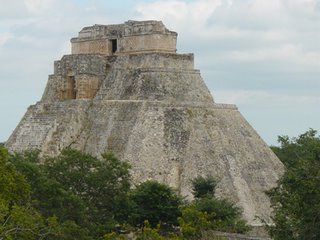 now with a little immigration if you look at the first level you will see an entrance
this was the earlier height , it was then added to and a new temple was added
and a outside layer it is also interesting that this temple dose not have the
nine layers that is usually seen in the Mayan world 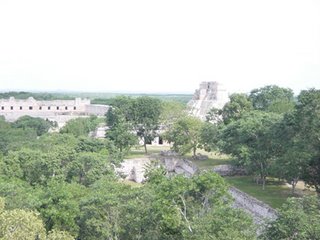 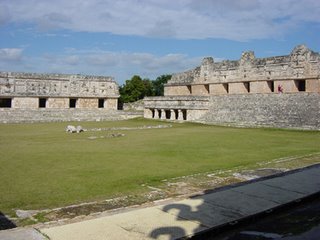 what is also uncommon hear as well is the square plaza with buildings on each
side and it is common at this site
one question that I all ways wondered was how did they work out what the
city looked like , the answer is simple there was city planers in this world
and they made models of the cities to work with and were placed in graves
ect 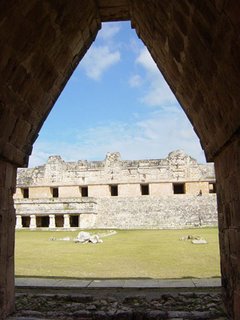 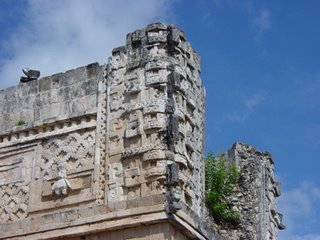 After a short drive across to Chichen Itza I arrived early to avoid the
midday rush form the busses from Cancun , this worked well
and I returned in the afternoon for a second look as thing were
slowing down and stayed for the sound and light show 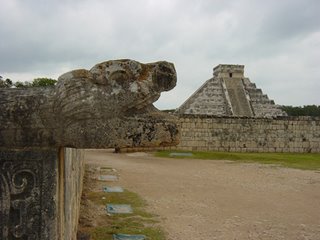 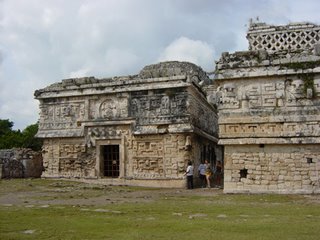 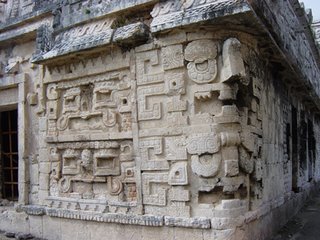 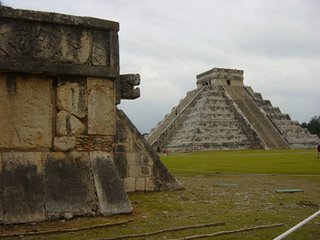 After a one day drive across Belize I arrive in Mexico , funny to say
but I am happy and feel safer here than I have been for some time ,
expecting to be searched by the Mexica customs it was a pleasent
supprise to just pass with no real check , my first stop is Tulum
and a dive in a Cenote ( warm freash water in a cave like setting) 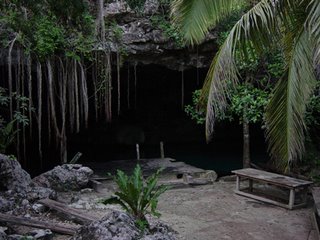 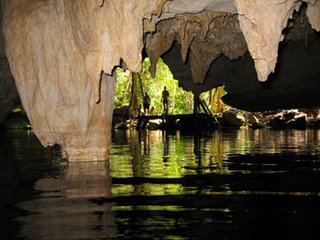 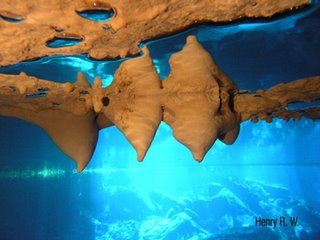 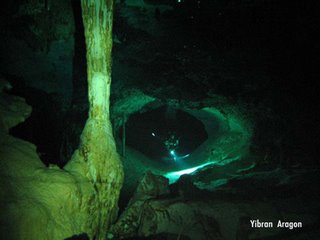 Glenn and his amazing Nissan. Just kidding here's the Nissan. 52,000K so far. 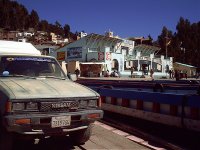 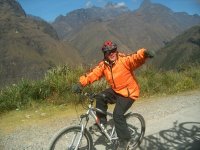